EXPLORE YOUR INNER INSPIRATION WITH THE COROS PRO ATHLETES

Home Pro Athletes Eliud Kipchoge
The COROS Pro Team are our top-class power users and live for exploring the impossible. All of them have been using COROS products intensively in the toughest courses in the world. What’s more important, they share the same passion of building the best products for athletes worldwide. 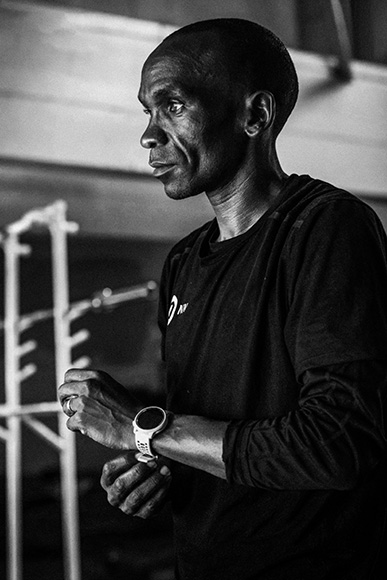 Eliud Kipchoge trains with the mantra – “No Human is Limited” and he has shown that first hand in his racing career. At just the age of 18 Eliud won a World Championship medal in the 5,000m and would go on to win 3 other global medals at the distance. However it was in 2013, when Eliud first started to show signs of what was to come in the future, by winning and breaking the course record in his debut marathon. It is almost hard to believe what would follow – 11 official marathon victories including 8 Marathon Majors, and the Olympic Games, twice setting course records in the London Marathon, and of course his world record run at the Berlin Marathon in 2018 (where he also broke the world records for 30k, 35k and 40k en route). Despite all of these accomplishments, they do not even mention what is perhaps Eliud’s greatest achievement as a runner – becoming the first and only human to run the marathon distance in under 2 hours – setting the world best 1:59:40 at the INEOS Challenge on a closed course in Vienna Austria in October 2019. Eliud was the 2018 United Nations Kenyan Person of the Year, and the 2018 and 2019 IAAF (now WAF) Male Athlete of the Year. Last but certainly not least, Eliud is a husband and a father of three, living and training near Eldoret, Kenya.